The federal response to Katrina was not as portrayed

Jason van Steenwyk is a Florida Army National Guardsman who has been mobilized six times for hurricane relief. He notes that:

"The federal government pretty much met its standard time lines, but the volume of support provided during the 72-96 hour was unprecedented. The federal response here was faster than Hugo, faster than Andrew, faster than Iniki, faster than Francine and Jeanne."

For instance, it took five days for National Guard troops to arrive in strength on the scene in Homestead, Fla. after Hurricane Andrew hit in 2002. But after Katrina, there was a significant National Guard presence in the afflicted region in three.
[...]
Journalists complain that it took a whole week to do this. A former Air Force logistics officer had some words of advice for us in the Fourth Estate on his blog, Moltenthought:

"We do not yet have teleporter or replicator technology like you saw on 'Star Trek' in college between hookah hits and waiting to pick up your worthless communications degree while the grown-ups actually engaged in the recovery effort were studying engineering.

And yes, the question remains:

A better question -- which few journalists ask -- is why weren't the roughly 2,000 municipal and school buses in New Orleans utilized to take people out of the city before Katrina struck?

What buses, you ask? These! 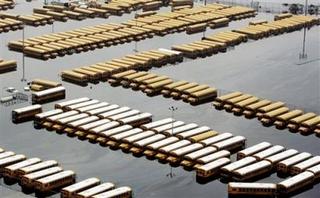 That's right, folks. The whiners in the media and in the New Orleans and La government have been asking (in falsely pained voices): Why didn't the Federal Government get everyone out of the city!?

The question they should be asking themselves (and their lawyers) is: How are we going to avoid criminal prosecution for gross dereliction of duty that lead to so many innocent deaths?