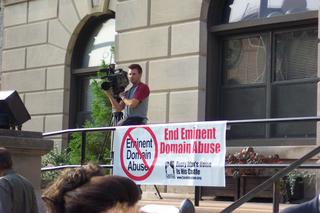 On Tuesday I headed down to the rally in front of the New London City Hall in support of the Fort Trumble property owners. It was timed to immediately precede a City Counsel meeting during which the property owners were going to, yet again, state their case during the time for public comments.*

The rally ran from 6 to 7pm and drew quite a few people and decent media coverage. I don't really have a good handle on the total number of people in attendance, but we were packed in cheek to jowl in front of City Hall and the crowd stretched around the corner and across the street. Beyond that, I'll let the pictures below speak for themselves.

The media coverage was ok. I didn't see any national news crews there, but NBC30 and Channel 8 news both had people covering the rally. In addition, I ended up standing next to a very friendly producer for a talk radio station in Baltimore. In terms of print media, I was interviewed by Kate Moran from The Day (the local New London paper) and by a reporter from the Courant, although I apparently didn't make the cut =).

A number of people spoke including Scott Bullock, who actually argued the case in front of the Supreme Court, Scott Sawyer (local council) and, as Mr. Bullock put it, New London's most famous resident, Susette Kelo.

Ms. Kelo gave a very nice, concise speech thanking everyone for their support and restating that she and the other home/property owners are not against development, they just want to be part of it...and not have their land stolen in the process. During her speech she was visibly overcome with emotion, during which time the crowd had no problem filling the momentary void with shouts of encouragement.

Overall, the crowd was very upbeat and positive. There was obviously a lot of pent up emotion, but no one let it get the better of them. The only objects thrown where the cardboard "NO" signs, and that at the request of one of the speakers. I should also mention that the police officers present at the rally were perfectly professional and quite friendly.

In an appropriate act of bipartisanship two Connecticut General Assembly members were in attendance and spoke in favor of passing legislation that would restrict eminent domain takings to cases that qualified as, you guessed it, serving "public use". Both House Minority Leader Robert Ward (R-North Branford) and House Assistant Majority Leader Steve Mikutel (D-Griswold) spoke in support of the homeowners. (Hint, hint. Drop them an email to thank them for their strong stance on this issue.)

Here are some more pictures I managed to snap during the rally. (Please forgive the formatting issues. Blogger's uploading software has a creative way of doing things from time to time.)

I also wanted to mention some people I met from outside Connecticut who had found themselves on the, shall we say, giving end of eminent domain takings.

Bruce Kanner from Yorktown Heights, NY, currently in his own fight against eminent domain.

Linda from Bound Brook, NJ (holding the "Save Our Homes" in a picture above).

Lori Vendetti from Long Beach, NJ (standing next to Linda). Their site is here.

I was glad to see so many people out to support the Fort Trumble homeowners as they continue to resist this egregious act by a City government that is willfully ignorant of the very principles upon which this country was founded.

Keep up the support and continue to write your elected officials to let them know, in no uncertain terms, where you stand on eminent domain stealings.

*Classy line from Margaret Curtin (a member of the New London City Council): "It didn't affect anyone," she said of the rally. "It wasn't on the agenda."

Also, much thanks to the many people who have helped get the word out by linking (and if I've missed anyone please let me know):