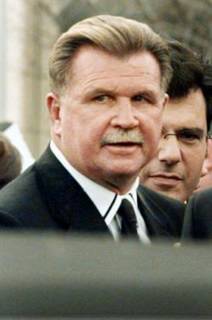 Mike Ditka running for Senate?! Boy I hope so. Now I know people are going to say things like: But he's just a football coach; He has no experience; blah, blah, blah.

Ditka is known in the sports world for his gritty approach to winning and a fiery temper. Mike leads by his code word ACE: Attitude, Character and Enthusiasm.

"Success isn’t measured by money or power or social rank. Success is measured by your discipline and inner peace."

"If you’re not in the parade, you watch the parade. That’s life."

"You're never a loser until you quit trying."

Some might say the United States Senate is refined or dignified. I'd say it's stuffy. Can you imagine Ditka turning to Ted Kennedy after some particularly hair-brained comment, yelling something to the effect of Sc@%w You! and then nailing Ted between the eyes with a well-placed wad of chewing gum?!

FLASH: Former Chicago Bears coach Mike Ditka will announce this morning at 9:30am he intends to run for senate in Illinois, says well-placed source...

Hey, he may not be a politician...and that only makes me like him all the more =).

FLASH: IN, OUT, IN, OUT, IN... DITKA IS OUT? Champaign, Illinois radio station WDWS is reporting that Mike Ditka will not be running for Senate. Morning personality and station manager Stevie Jay spoke with Ditka in the last hour and Ditka told him that he had too many other commitments. Ditka is a regular guest of Stevie Jay's during the football season... Developing...