Let me start by saying that THK creeps me out. I don't know if it's her way of using English or if it's just her...but I get really uncomfortable just watching her talk. If Uncle Bernie ever said anything I think he'd sound like her.

Anyway, here's the text of her speech.

As for her husband, I had to laugh twice about these pictures. First, they're funny. Second (as Drudge reports):

HUME: so the campaign had no idea there would be any photographs.

Umm...I hate to point painfully obvious facts (although you'd never know it from the frequency with which they appear on my blog...), but look at this picture and then tell me that Ms. Cahill is not lying through her teeth. 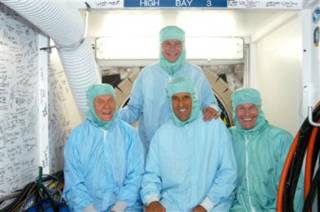 Kerry posing for a picture of which he is obviously unaware.

NASA's been accused of leaking these photos without telling the Kerry campaign (via The Command Post):

...the National Aeronautics and Space Administration told Fox News that the Kerry team saw the photos before publication and passed on their release.

I can almost taste the syrup.

From the article above also comes this little gem:

"My hunch is that the brilliant Republicans who put George Bush in a flight suit to strut around an aircraft carrier won't get very far giving advice to NASA and John Glenn about the kinds of coveralls to wear" on the Space Shuttle Discovery, Kerry campaign spokesman David Wade said yesterday.

I suppose there's really no difference. After all, Bush was a real live fighter pilote and so he's got every right to wear the flight suit. Similarily, Kerry has ever right to wear the 'bunny suit' by virtue of him being a total space cadet =).

When all the dust settles, I agree with Tim Russert:

All politicians, stop getting in outfits. Just stop it.

pacetown has a pretty funny photoshopped picture of Kerry in his bunny costume.

And perhaps even better =).

Rush has an interesting "news flash" on this topic (although I haven't heard this anywhere else yet):

"NASA spokesman Bill Johnson," get this, "said that the Kerry campaign asked that the pictures be taken of Kerry's unusually up-close tour of the shuttle Discovery, and that processing of the pictures be expedited so reporters could have them."

I think he's right on with this bit of advice:

and there's one thing you can understand about the psychology of these people, especially the Kerry campaign as well as many people on the left, and that is they actually -- if you want to find out what their tactics are, listen to what they accuse their opponents of doing. They do that which they accuse others of doing against them. So there you have it.