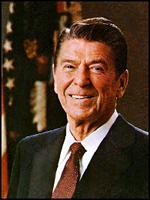 At first I wrote nothing, just posted a picture. Words seemed too coarse for such a moment. I suppose that they most likely still are, but I feel compelled to share my thoughts here, with you.

I am too young to recall President Reagan in office, but to me he has always had a mythical aura. Much of what I know about Reagan the President and Reagan the Man has been infused into my subconscious over the years. I knew he was an actor and Governor before becoming President. I had heard that he was the Great Communicator, the Gipper, the Slayer of Communism and a bumbling fool who was fed lines to read. And that, sadly, was the extent of my knowledge until I read Reagan: A Life in Letters.

This compilation of his personal correspondence is absolutely amazing. It gives wonderful insight into the mind of, as it turns out, an extremely deep, caring, honest and (above all) genuine man. I have heard it said this weekend by many a pundit and ‘Presidential historian’ that it will take years for us (the ‘Presidential historians’) to figure out what Reagan meant to the country and the world. I don’t need another two seconds…I know exactly what he means to me.

Ronald Wilson Reagan is the gold standard by which I will forever judge all Presidents, public servants and people generally. I would consider my country and myself unbelievably fortunate to ever see such a wonderful man and great leader again elected President in my lifetime. I only hope that we have the wisdom to continue the process he began by defeating Communism of bringing peace, freedom and prosperity to the world.

May God rest your soul Mr. President, and give your family peace.

See Chrenkoff's post for prespective on Ronald Reagan from one who lived under the Evil Empire.